March 10, 2017 In Illustration Serendipity Travel Uncategorized
It’s already been a few years ago, but I still cherish the memories of the trip to New York City together with my father and two friends – a mother/daughter couple. Besides the usual sights, we went to visit the places where our personal heroes would perform or used to hang out. My father is a huge jazz lover so we went to the Village Vanguard (just recovering from a water damage) and Birdland, where we actually saw a great concert by the Dave Holland Quintet. As one of our travel companions is a true Paul Auster lover, we also dedicated one morning to track him down in Brooklyn. This endeavor seemed too far-fetched, but it’s a genuine story that we got in return for all of our efforts. And a great lunch at the Two Boots restaurant. Very important to me, since I’m a true food lover.

My friend was so kind to let me share her version of the search for Paul Auster with you.
Please continue reading her short story below: My mother, although cultivating subtle anti-American sentiments, loves New York. She loves the city for being an island of grace and intellect within an unpleasant ocean of the rest of American culture. This love includes all kinds of artists, for example, painters like Edward Hopper, who is the interior designer of my mother’s idea of New York, whose paintings are the wallpaper of her fantasies.

Her love also includes Paul Auster. She loves him not only for the books he writes, as very few people love authors exclusively for their books. She also loves Paul Auster because he lives in New York, and most of all because he uses the same typewriter she does.

So when we visited NY in order to match her idea of the city with the reality of a five-day trip, my mum’s prior mission was to seek out Paul Auster, to find his street, to filter him violently out of his books, to get him out of the space of literature, to make him surrender and then to make friends with him. Soon it started to dawn upon me that I was meant to be Watson in this perfidious noir scenario, while my mum became a harder-boiled mutant of Phillip Marlowe and acted shockingly self-reliant. Fortunately, I could share the Watson part with two friends who accompanied us, Walter and his daughter Judith, who shared our love for Paul Auster, even without sharing the same type of typewriter.

But you do not contradict Philip Marlowe anyway. This is why we did not eat 30 cupcakes in Greenwich in the morning of our second day in order to spend the rest of the day in the Central Park. Instead, I found myself driving to Brooklyn very early in the morning, armed to the teeth with interviews, articles, and pictures that showed either Paul Auster or his wife in front of their house or sitting on a window sill, which might allow concluding the look of the street outside. One of the main obstacles was of botanical nature: no one among us was able to identify a tree that could be seen in the background of a portrait of Siri Hustvedt. Walter voted for a linden tree, Judith believed it to be a plane tree, I was unable to make a decision. Even my mum had not thought of a guide to tree classification.

Finding the right street had not been a problem at all. No strange people, no obscure riddles led us astray. The weather was great, the sun was shining, Brooklyn was a nice place to be after all, even for serious detectives like us. The problem was, to foolishly give away the ending in the middle: we didn’t find Paul Auster. The people we met had been living in the street for 25 up to 90 years and had never even heard his name. At least that’s what they would tell us.

After several hours of more or less instructive inquiries, of analyzing treetops and leaves and repeatedly called for perseverance by my mother, we decided to eat some pizza in a small and colorful-looking place at a street corner. The staff was nice and the pizza was great. The same can be said about the homemade lemonade we ordered, but let’s not lose our way. When the owner looked into our faces and saw how exhausted we were and when we told him about our mission, he sat down with us and told us the following story:

The pizza place (the name is Two Boots by the way, in case you will visit New York someday) offers a pizza for children which is called Pizza Face. It has a red pepper for a mouth, olive eyes and broccoli making up the nose.

Some time ago, a stranger had repeatedly ordered pizza on the phone and always was it the pizza for children that happened to be his choice. But every time the anonymous man called and ordered “Pizza Face”, he had an almost obscene special request: He wanted a featureless version of it. An anonymous pizza without the olives, without red pepper, without broccoli; more anonymous than an ordinary cheese pizza could ever be.

But the loss of face also resulted (apart from the philosophical implications) in a crucial difference between prices: the Pizza Face, smiling or defaced, costs 20 cents less than its impersonal counterpart. I leave it to you to wonder about the caller’s identity.

We weren’t 100% sure if we had just discovered Paul Auster’s favorite pizza place or found a congenial storyteller. But having heard this story, the three Watsons of our detective agency were satisfied. We hadn’t found the subject, but we had found a trace (what real detectives actually long for), and a story had finally found us. My mum was full of pity. Or maybe she also felt her spiritual kinship intensified (she is virtually unable to order from the menu in any restaurant without changing at least a tiny detail of the dish). She left her email address at the restaurant and also money in case the mysterious man would call again. After this exciting morning, we drove to Coney Island and spent the rest of the day in the sun.

Several months later, my mum got the following email:

“helga, I am writing on behalf of paul auster. he went into two boots recently
and was very surprised an happy to find out that you had bought him a pizza!
he thanks you heartily for it. 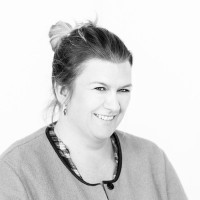